What Your Cat's Tail is Telling You

Did you know you can tell a lot about your cat's emotional state just by looking at their tail? Cats use the extreme mobility of their tail as an important means of communication. The combination of its position, shape, and movements provides meaning — often alongside other types of body language and forms of communication like vocalization. Even the position of the fur on the cat's tail provides a clue about their mood. If you want to better identify when your cat feels relaxed, playful, anxious, fearful, and a host of other sensations, check out their tail.

What Can I Learn from My Cat's Tail Position, Shape, and Movement?

Have you ever asked yourself what it means when your cat's tail is turned down or up, swishes slowly, or curls around your arm? While it's essential to look at all of your cat’s body language to clearly understand their intent, you can tell a lot just by looking at their tail. Here's an in-depth look at tails and the feelings and behaviors they reflect.

Horizontal. A tail that is horizontal to the ground and directly behind the cat is a neutral or friendly position.

Lowered. Another neutral tail position is lowered and sloping diagonally to the ground.

If the tail is lowered so much that it is perpendicular, at more of a right angle to the ground, this position indicates an offensive threat. Your cat may show aggressive behavior next.

However, not all lowering of the tail is a sign of communication. For example, if a cat is walking and then starts to run, the tail's position usually lowers as the pace increases. This change is functional, not for communication.

The hook. A lowered tail with both the base and tip curved, forming a "hook," indicates defensive aggression. In addition, the hair on the tail may be standing up and the back may be arched.

Tucked between legs. Tucking the tail between the hind legs is a sign of fear. It is a way for the cat to make themselves look smaller and less threatening to an aggressor.

Be aware that a tucked tail may also be an indicator of illness. When a cat is not feeling well, they might sit in a hunched position, often sitting on the tucked tail.

Raised at an angle, swishing. If a tail is raised at an angle accompanied by a swishing motion, the meaning can change depending on the speed of the swish. If the tail moves slowly and smoothly from side to side, they are relaxed and mildly interested or focused on an object. If the swishing accelerates, it may signal irritability.

Twitching/thrashing. The structure of a cat's tail supports a wide variety of movements, from a slight flutter of the tip to a volatile thumping of the entire tail from side to side. The trigger can range from contemplation to play engagement to extreme irritation. The more distraught the cat is, the faster the tail will move.

The wagging of a cat's tail doesn't mean the same thing as a dog's — often, it's the opposite. When a dog wags their tail, it's an invitation to engage with them. When a cat does it with the same enthusiasm, it's a warning to stay away.

Vertical, curved. The amount that a straight-up tail is curved can mean different things:

Vertical, fur erect. The combination of a straight-up tail with bristled hair standing on end reflects a fearful cat exhibiting defensive behavior or a severely distressed cat showing signs of offensive behavior. This is done to make the cat look bigger and more threatening to aggressors. To increase their apparent size even further, the cat may stand more upright and turn their body sideways.

Vertical, fur flat. When the tail is straight up, and the fur is lying naturally flat, it emotes feelings of happiness, confidence, and contentment. This position is often used as a friendly greeting for both two-legged and four-legged creatures alike.

Vertical, quivering. A vertical quivering tail is when the tail is straight up and shaking with a slight but rapid motion. Although this is the action that a cat makes when spraying urine, when it occurs devoid of urine, it's an indication of high arousal. This can reflect anything from extreme happiness to anticipated conflict.

Wraparound. When cats drape their tail around another living being, whether it be another cat, a person, or the family dog, it is a sign of a tender and trusting bond between them. Similar to when people put their arms around one another, it's an expression of friendship. 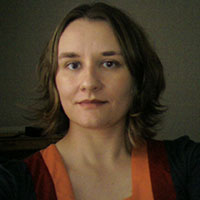 Dr. Melody R. Conklin is originally from Youngsville in northwestern Pennsylvania and earned her BS at The Pennsylvania State University, University Park in 2003, where she majored in Animal BioScience and minored in Wildlife and Fisheries Science. She then attended the University of Pennsylvania, earning her VMD in 2007. Dr. Conklin worked in companion animal general practice until 2015 when she joined Zoetis’ Veterinary Medical Information and Product Support department while finishing her MBA at Penn State Great Valley in 2017. Dr. Conklin currently works full-time in a companion animal practice while working with Zoetis US Petcare Medical Affairs in a consultant role. She lives in Sinking Spring, PA with her 4 cats, Vegeta, Fluffzor, Poof, & Butter, and 3 guinea pigs, Pascha, Elena, & Caroline.