For every 10 points you earn with eligible product purchases, you’ll get $1 in rewards for future vet visits. 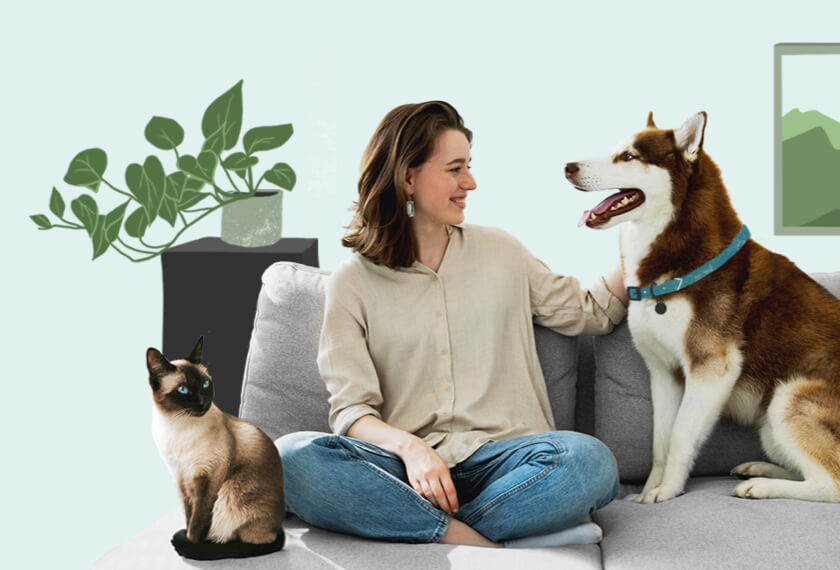 Simparica Trio
Use with caution in dogs with a history of seizures. Simparica Trio contains sarolaner, a member of the isoxazoline class, which has been associated with neurologic adverse reactions including tremors, ataxia, and seizures in dogs with or without a history of neurologic disorders. The safe use of Simparica Trio has not been evaluated in breeding, pregnant, or lactating dogs. The most frequently reported adverse reactions in clinical trials were vomiting and diarrhea. See full Prescribing Information.

Revolution Plus
The safe use of Revolution Plus has not been established in kittens less than 8 weeks old or in breeding, pregnant or lactating cats. Reported side effects in clinical trials included lethargy and anorexia. Use with caution in cats with a history of neurologic disorders. Sarolaner, one of the ingredients in Revolution Plus, is a member of the isoxazoline class, which has been associated with adverse reactions such as tremors, ataxia, and seizures. Reactions have occurred in cats with or without a history of neurologic disorders. In humans, Revolution Plus may be irritating to skin and eyes. See full Prescribing Information.

Simparica
Simparica is for use only in dogs, 6 months of age and older. Simparica may cause abnormal neurologic signs such as tremors, unsteadiness, and/or seizures. Simparica has not been evaluated in dogs that are pregnant, breeding or lactating. Simparica has been safely used in dogs treated with commonly prescribed vaccines, parasiticides and other medications. The most frequently reported adverse reactions were vomiting and diarrhea. See full Prescribing Information.

Apoquel
Do not use Apoquel in dogs less than 12 months of age or those with serious infections. Apoquel may increase the chances of developing serious infections, and may cause existing parasitic skin infestations or pre-existing cancers to get worse. Consider the risks and benefits of treatment in dogs with a history of recurrence of these conditions. New neoplastic conditions (benign and malignant) were observed in clinical studies and post-approval. Apoquel has not been tested in dogs receiving some medications including some commonly used to treat skin conditions such as corticosteroids and cyclosporines. Do not use in breeding, pregnant, or lactating dogs. Most common side effects are vomiting and diarrhea. Apoquel has been used safely with many common medications including parasiticides, antibiotics and vaccines. See full Prescribing Information.

Convenia
People with known hypersensitivity to penicillin or cephalosporins should avoid exposure to Convenia. Do not use in dogs or cats with a history of allergic reactions to penicillins or cephalosporins. Side effects for both dogs and cats include vomiting, diarrhea, decreased appetite/anorexia and lethargy. See full Prescribing Information.

Rimadyl
As a class, NSAIDS may be associated with gastrointestinal, kidney and liver side effects. These are usually mild, but may be serious. Pet owners should discontinue therapy and contact their veterinarian immediately if side effects occur. Evaluation for pre-existing conditions and regular monitoring are recommended for pets on any medication, including Rimadyl. Use with other NSAIDS or corticosteroids should be avoided. See full Prescribing Information.

Sileo
Do not use Sileo in dogs with severe cardiovascular disease, respiratory, liver or kidney diseases, or in conditions of shock, severe debilitation, or stress due to extreme heat, cold or fatigue or in dogs hypersensitive to dexmedetomidine or to any of the excipients. Sileo should not be administered in the presence of preexisting hypotension, hypoxia, or bradycardia. Do not use in dogs sedated from previous dosing. Sileo has not been evaluated in dogs younger than 16 weeks of age or in dogs with dental or gingival disease that could have an effect on the absorption of Sileo. Sileo has not been evaluated for use in breeding, pregnant, or lactating dogs or for aversion behaviors to thunderstorms. Transient pale mucous membranes at the site of application may occur with Sileo use. Other uncommon adverse reactions included emesis, drowsiness or sedation. Handlers should avoid direct exposure of Sileo to their skin, eyes or mouth. Failure to lock the ring-stop on the syringe before dosing Sileo could potentially lead to an accidental overdose. Always review INSTRUCTIONS FOR USE before dispensing and dosing. See full Prescribing Information.

Cerenia
Use Cerenia Injectable for vomiting in cats 4 months and older; use subcutaneously for acute vomiting in dogs 2 to 4 months of age or either subcutaneously or intravenously in dogs 4 months of age and older. Use Cerenia Tablets for acute vomiting in dogs 2 months and older, and for prevention of vomiting due to motion sickness in dogs 4 months and older. Safe use has not been evaluated in cats and dogs with gastrointestinal obstruction, or those that have ingested toxins. Use with caution in cats and dogs with hepatic dysfunction. Pain/vocalization upon injection is a common side effect. In people, topical exposure may elicit localized allergic skin reactions, and repeated or prolonged exposure may lead to skin sensitization. See full Prescribing Information.